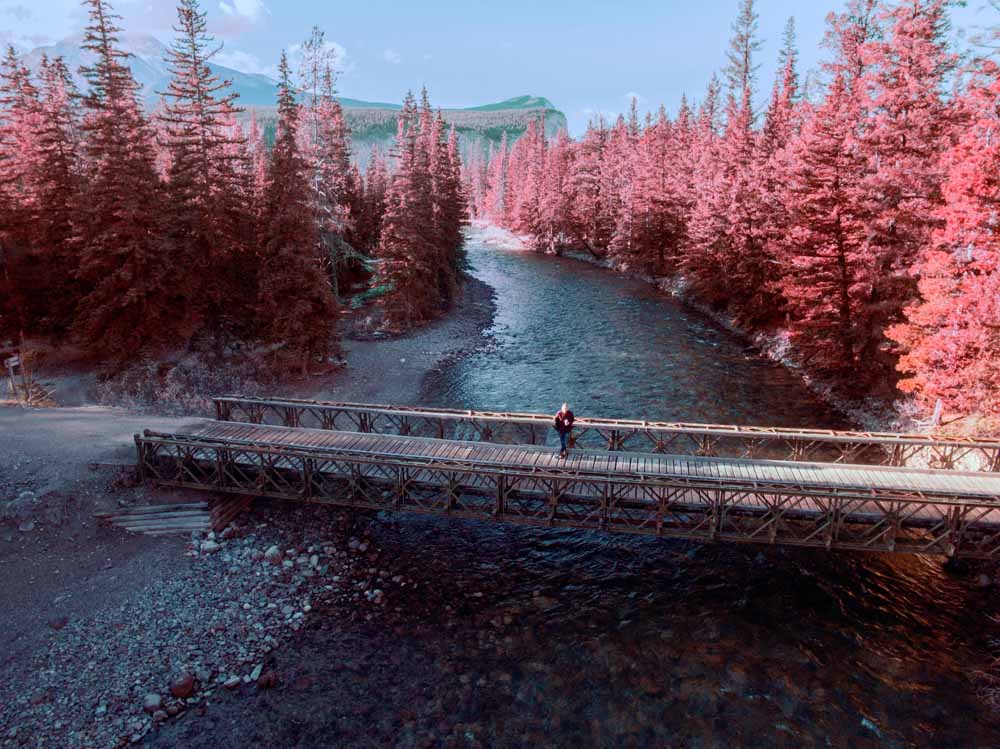 Jasper National Park, nestled in the Canadian Rocky Mountains, is scenic and serene. It’s the perfect place to stargaze, as Jasper is the world’s second largest dark sky preserve – a term bestowed on areas that preserve and protect the night sky and that commit to reducing or eliminating light pollution.

Jasper is Canada’s largest national park and is known for it’s wild and rugged hiking trails, stargazing, skiing and snowboarding at Marmot Basin, and the world-renowned Columbia Icefield.

In January the park has a month-long festival called “Jasper in January” with winter events taking place everyday. There are multiple snowshoeing events, you can go dogsledding, stargazing, ice climbing, there are sleigh rides, storytelling, live music, and much more during the January festivities. There is a wide variety of activities ranging from free events to thousand-dollar packages that are suitable for all ages.

We drove from Edmonton, Alberta to Jasper National Park. It’s about a four-hour drive. There is no possible way to fly into Jasper, as the National Park does not have an airport. The nearest airports would be in Edmonton, Calgary, or Grande Prairie and each city is about four to five hours from Jasper.

There are plenty of cheap car rental agencies located in all three cities, like Budget Car Rental or Enterprise. You can get a standard Volkswagen Jetta from Enterprise for four days and three nights for about $155. Another option is to use the app Turo, which is like Airbnb but for cars. You can rent a Toyota Corolla for around $25 a day, or a Dodge Caravan for $52 a day.

We stayed at the Chateau Jasper Hotel, a three-star hotel, that had a very laidback atmosphere. It also included a heated pool, spa, and pub-style restaurant for $82 a night. We were there for four days and three nights. The hotel is also very close to the Skytram, the longest and highest aerial tramway in all of Canada. This was unfortunately closed, as it is only open March through October.

One of the first things that we did when we got to Jasper was the snowshoeing. We went on the “Wildlife (Species at Risk)” excursion. During the trek we learned about different species of animals that live in the National Park, how they are tracked, and how the rangers use the data collected to study the wildlife populations. This was a free event where snowshoes were provided.

The next event we took part in was the dogsledding. While waiting for the different sleds to free up we spent our time drinking hot cocoa and playing with the huskies that were resting between sled rides. That honestly was more fun then the actual dogsledding because huskies are my favourite breed of dog, so I spent a lot of time getting husky kisses and cuddles. The dogsledding itself was fast paced. You sit in the sled as the dogs pull you around the frozen Pyramid Lake. We simply flew across the ice and snow. I suggest you dress very warmly for this event, as the wind whipping by will make you chilly.

Some of the other activities we took part in were the sleigh rides – where we got more hot cocoa – the Loud and Proud party, which featured some brilliant Drag performances, took a fire-starting class, and listened to storytelling under the stars. Métis and Indigenous legends were shared with us as we sat around a campfire, underneath the night sky. We listened enraptured as we learned about the history of the National Park and immersed ourselves in the cultural stories.

On our last day we decided to go for a hike and check out the Columbian Icefield. We really wanted to see the Athabasca glacier, and we marvelled at the giant walls of ice.

Note that if you are going to go on hikes by yourself be mindful of the weather. Be aware that there are also grizzly bears and wolves in the National Park. You can always book a guide to take you on a hike.

Jasper is a beautiful, peaceful place to visit. But it is still untamed and raw and wild. Be respectful and take precautions when travelling through the park.

What To Expect When Traveling To Phnom Penh