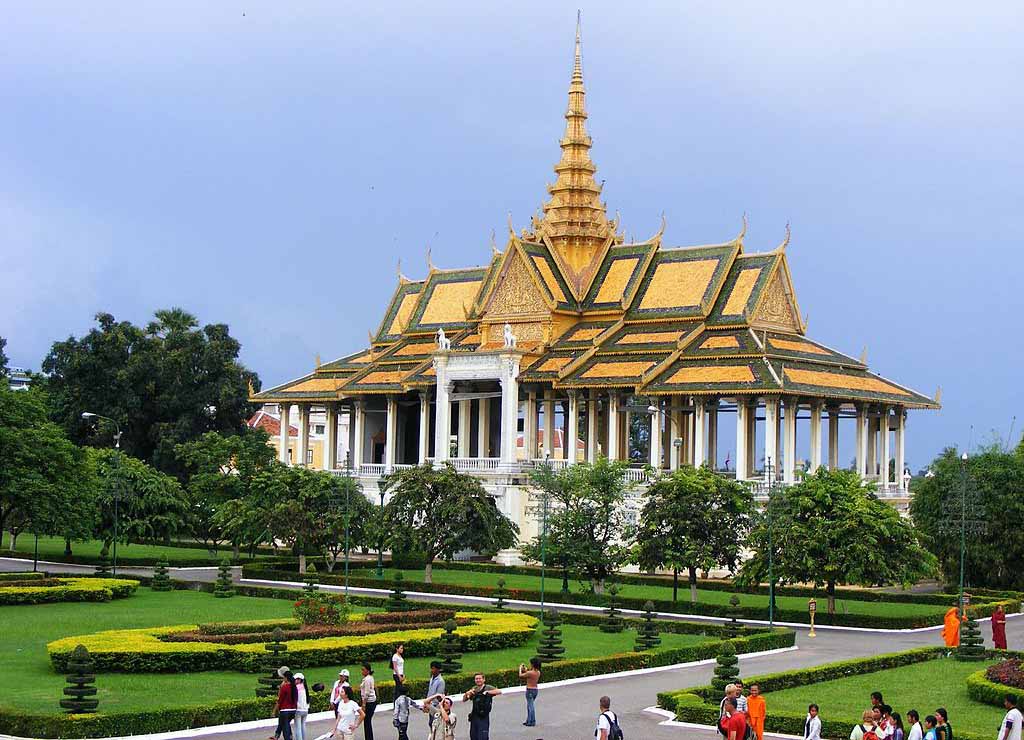 Cambodia is a great destination for budget travelers, between the affordable living expenses and beautiful sights, there is much to be offered.

Flights are relatively cheap if you check out our flight search engine. During low season you can find round trips from North America for about $400-$500 from major international airports. Accommodations won’t run you too much either unless you’re staying at a fancy resort. Dorm-style hostels will cost you about $5 USD per night and a private room for $25 USD

Food and drink is relatively cheap as well. Some restaurants offering a full Asian-style entree for as low as $3 and a pint of beer costing you 50 cents during happy hour.

When you arrive at the airport

you’re immediately going to be hit with a wave of moist, warm air so you’d better have a t-shirt and shorts on hand. Upon admittance into the country, you’re going to propositioned by multiple services offering you a tuk-tuk. (A type of open carriage attached to a motorcycle.) They’ll ask where you are going and offer to take you there for $15-$20, however, if you’re good at bartering, you can convince them to drive you for only $10. Always agree on a price before you accept the service, otherwise they can charge you whatever they want and you’ll be obligated to pay it.

So you’ve settled into your accommodations, now what?

There are a lot markets around the city. You can find almost anything and the price is negotiable on everything. Clothing, jewelry, luggage, art work, and food are what you’ll see the most of. Be careful of brand name items because they’re usually counterfeit and cheaply made. You’ll mostly be using USD throughout the country for any purchases over a dollar, everything less than a dollar, the locals use riel. (The local currency.) Four-thousand riel is equivalent to one US dollar.

A few of the most popular sights are The National Museum of Cambodia and The Royal Palace. It’s recommended that you do both in the same day as they are located right beside each other. Both locations have architecture and cultural significance that is to be admired. The National Museum of Cambodia has the largest collection of Khmer art dating from the prehistoric times to after the fall of the Khmer Empire. With 14,000 items within the museum, there’s a lot to look at.

The Royal Palace is a spectacle in it’s own right

It is a complex of buildings which serve as the royal residence of the king of Cambodia. The Kings of Cambodia have occupied it since it was built in the 1860’s. The Royal Palace of Cambodia is a fine example of Khmer architecture with a small French touch featuring its layout of the defensive wall.

Phnom Penh is a city that also has a very dark history. If you know anything about the Khmer Rouge and the genocide that happened there within the last 100 years, there a couple places you can go to see the history for yourself and pay your respects.

The S-21 Torture Prison and The Killing Fields are incredibly emotional tours to do, but it is very important to learn about and understand what happened there. I must warn, these locations will make your stomach twist and turn. The S-21 Torture Prison is located in the heart of Phnom Penh. It costs $5 to enter and for an extra $3 you can get the audio tour which is recommended. You will hear the survivors stories as you enter each building within the prison. The two remaining survivors alive to date are commonly there to share their personal story and are selling their book based on their traumatic experience.

Located just outside of Phnom Penh are The Killing Fields. This is where the Khmer Rouge took the prisoners from the S-21 Prison to be killed. You will further learn the history of the Khmer Rouge and how they were brought to justice by the United Nations. Be prepared for more heart-wrenching stories and sights however.

For a lighter and more enjoyable atmosphere, there is a thriving nightlife in Phnom Penh with large clubs featuring incredible light shows and great music.

Overall, Phnom Penh is the perfect city to visit for a great time and chance to become more humbled within its culture.